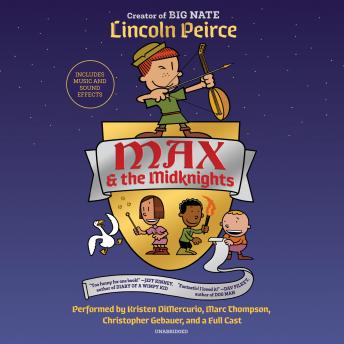 Max and the Midknights

Download or Stream instantly more than 55,000 audiobooks.
Listen to "Max and the Midknights" on your iOS and Android device.

Join Max's quest to become a knight in this laugh-filled adventure from theNew York Times bestselling author of the Big Nate series!

Max wants to be a knight! Too bad that dream is about as likely as finding a friendly dragon. But when Max's uncle Budrick is kidnapped by the cruel King Gastley, Max has to act...and fast! Joined by a band of brave adventurers--the Midknights--Max sets out on a thrilling quest: to save Uncle Budrick and restore the realm of Byjovia to its former high spirits!

Magic and (mis)adventures abound in this hilarious novel from the New York Times bestselling creator of the Big Nate series, Lincoln Peirce, performed by a full cast. This dramatization transforms the illustrated novel into a truly original audio performance and includes music and special effects.

Performed by Kristen DiMercurio as Max, Marc Thompson as Uncle Budrick, and Christopher Gebauer as Kevyn,
with Jessica Almasy as Millie, Fred Berman as Mumblin, Dan Bittner as Conrad, Michael Crouch as Gastley, Jonathan Davis as Gadabout, James Fouhey as Simon, Jim Frangione as Nolan, and January LaVoy as Fendra