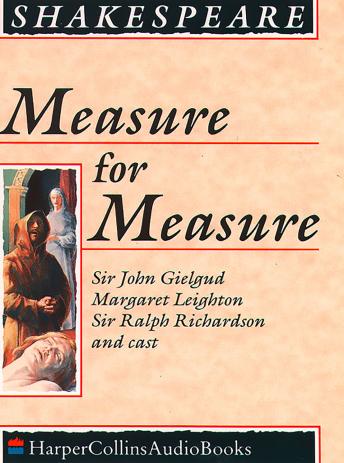 Download or Stream instantly more than 55,000 audiobooks.
Listen to "Measure for Measure" on your iOS and Android device.

Measure for Measure is a play by William Shakespeare, believed to have been written in 1603 or 1604 performed by Sir John Gielgud and cast.


Measure for Measure is a play by William Shakespeare, believed to have been written in 1603 or 1604. It was (and continues to be) classified as comedy, but its mood defy those expectations. As a result and for a variety of reasons, some critics have labeled it as one of Shakespeare's problem plays. Originally published in the First Folio of 1623 (where it was first labeled as a comedy), the play's first recorded performance was in 1604. The play deals with the issues of mercy, justice, and truth, and their relationship to pride and humility: 'Some rise by sin, and some by virtue fall'.