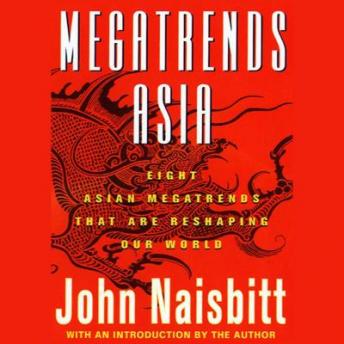 Megatrends Asia: Eight Asian Megatrends That Are Reshaping Our World

Download or Stream instantly more than 55,000 audiobooks.
Listen to "Megatrends Asia: Eight Asian Megatrends That Are Reshaping Our World" on your iOS and Android device.

America's #1 trend forecaster reveals the global transformation that affects the future for us all!
The most momentous global development of the 1990s.
The #1 bestselling author of Megatrends and Megatrends 2000 now offers a glimpse of your future that begins on the other side of the globe -- where the once isolated nations of Asia are networking into an economic colossus that will soon become a dominant force in the rest of the world.
While many Americans continue to focus on Europe, the eyes on the East see a different future -- a time, five years away, when the gross national product of Asia will double Europe's, representing a third of the entire world economy. Describing the dramatic changes now underway in a rapidly modernizing Asia, John Naisbitt identifies the eight significant megatrends that characterize the region's unprecedented transformation, and that will have a profound influence on the way Asia and the West do business with each other for decades to come.
A look into the future from the world's most authoritative trend forecaster, Megatrends Asia is your guide to the global shift of the world's economic, political and cultural center of gravity that will have enormous consequences for us all.