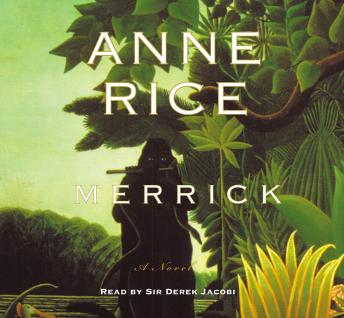 Download or Stream instantly more than 55,000 audiobooks.
Listen to "Merrick" on your iOS and Android device.

In her mesmerizing new novel, the author of The Vampire Chronicles and the saga of the Mayfair Witches demonstrates once again her gift for spellbinding storytelling and the creation of myth and magic. Here, in a magnificent tale of sorcery and the occult, she makes real for us a hitherto unexplored world of witchcraft.

At the center is the beautiful, unconquerable witch Merrick. She is a descendant of the gens de couleur libres, a society of New Orleans octoroons and quadroons steeped in the lore and ceremony of voodoo, who reign in the shadowy world where African and French--the dark and the white--intermingle. Her ancestors are the great Mayfair witches, of whom she knows nothing--and from whom she inherits the power and the magical knowledge of a Circe.

Into this exotic realm comes David Talbot--hero, storyteller, adventurer, almost-mortal vampire, visitor from another dark realm. It is he who recounts Merrick's haunting tale--a tale that takes us from the New Orleans of past and present to the jungles of Guatemala, from the Maya ruins of a century ago to ancient civilizations not yet explored.

Anne Rice's richly told novel weaves an irresistible story of two worlds: the witches' world and the vampires' world, where magical powers and otherworldly fascinations are locked together in a dance of seduction, death, and rebirth.