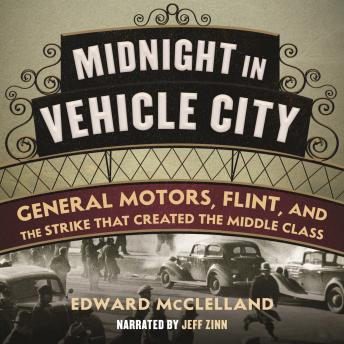 Midnight in Vehicle City: General Motors, Flint, and the Strike That Created the Middle Class

Download or Stream instantly more than 55,000 audiobooks.
Listen to "Midnight in Vehicle City: General Motors, Flint, and the Strike That Created the Middle Class" on your iOS and Android device.

Winner of the 2021 Midland Authors Book Award in History

In a time of great inequality and a gutted middle class, the dramatic story of “the strike heard around the world” is a testament to what workers can gain when they stand up for their rights.

The tumultuous Flint sit-down strike of 1936-1937 was the birth of the United Auto Workers, which set the standard for wages in every industry. Midnight in Vehicle City tells the gripping story of how workers defeated General Motors, the largest industrial corporation in the world. Their victory ushered in the golden age of the American middle class and created a new kind of America, one in which every worker had a right to a share of the company’s wealth. The causes for which the strikers sat down—collective bargaining, secure retirement, better wages—enjoyed a half century of success. But now, the middle class is disappearing and economic inequality is at its highest since before the New Deal.

Journalist and historian Edward McClelland brings the action-packed events of the strike back to life—through the voices of those who lived it. In vivid play-by-plays, McClelland narrates the dramatic scenes including of the takeovers of GM plants; violent showdowns between picketers and the police; Michigan governor Frank Murphy’s activation of the National Guard; the actions of the militaristic Women’s Emergency Brigade who carried billy clubs and vowed to protect strikers from police; and tense negotiations between labor leader John L. Lewis, GM chairman Alfred P. Sloan, and labor secretary Frances Perkins.

The epic tale of the strike and its lasting legacy shows why the middle class is one of the greatest inventions of the 20th century and will guide our understanding of what we will lose if we don’t revive it.