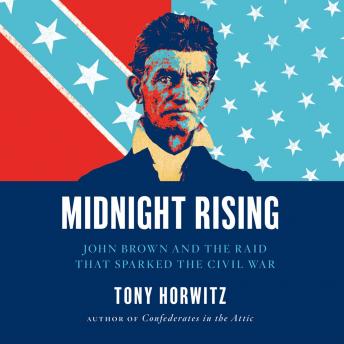 Midnight Rising: John Brown and the Raid That Sparked the Civil War

Download or Stream instantly more than 55,000 audiobooks.
Listen to "Midnight Rising: John Brown and the Raid That Sparked the Civil War" on your iOS and Android device.

A New York Times Notable Book for 2011
A Library Journal Top Ten Best Books of 2011
A Boston Globe Best Nonfiction Book of 2011
Bestselling author Tony Horwitz tells the electrifying tale of the daring insurrection that put America on the path to bloody war
Plotted in secret, launched in the dark, John Brown's raid on Harpers Ferry was a pivotal moment in U.S. history. But few Americans know the true story of the men and women who launched a desperate strike at the slaveholding South. Now, Midnight Rising portrays Brown's uprising in vivid color, revealing a country on the brink of explosive conflict.
Brown, the descendant of New England Puritans, saw slavery as a sin against America's founding principles. Unlike most abolitionists, he was willing to take up arms, and in 1859 he prepared for battle at a hideout in Maryland, joined by his teenage daughter, three of his sons, and a guerrilla band that included former slaves and a dashing spy. On October 17, the raiders seized Harpers Ferry, stunning the nation and prompting a counterattack led by Robert E. Lee. After Brown's capture, his defiant eloquence galvanized the North and appalled the South, which considered Brown a terrorist. The raid also helped elect Abraham Lincoln, who later began to fulfill Brown's dream with the Emancipation Proclamation, a measure he called 'a John Brown raid, on a gigantic scale.'
Tony Horwitz's riveting book travels antebellum America to deliver both a taut historical drama and a telling portrait of a nation divided-a time that still resonates in ours.