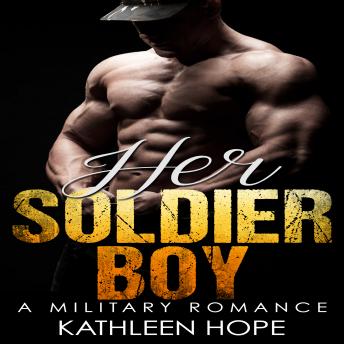 Download or Stream instantly more than 55,000 audiobooks.
Listen to "Military Romance: Her Soldier Boy" on your iOS and Android device.

I looked up to see the guy Shaquanna was referring to. He was the same guy who'd been coming into the coffee shop where I worked as a waitress every day. I didn't think anything of it. He was probably new in town or just passing through.

He shuffled in and sat down in a booth near the window. He carried a green duffel bag that he dropped on the booth seat next to him. I figured he must be military because his green looked Army issue. I took a moment to study him. His medium brown hair was thick and in need of a haircut. Dark stubble marred his jaw and from this far away, I couldn't tell what color his eyes were.

'He's sitting in your section, Regan. As usual.' Shaquanna grinned suddenly. 'Why, I think you got yourself a secret admirer,' she said in a fake southern drawl. She gave the man a closer look. 'Your mystery man could seriously use a shower, shave, and a haircut...'