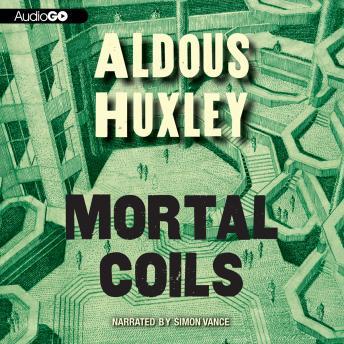 Download or Stream instantly more than 55,000 audiobooks.
Listen to "Mortal Coils" on your iOS and Android device.

Mortal Coils is a collection of five pieces, which were written by Aldous Huxley in the 1920s. The first one, "The Giaconda Smile," is a short murder story. "Permutations among the Nightingales" is a play concerning amorous problems had by patrons of a certain establishment. "The Tillotson Banquet" tells of an old artist who was thought to be dead. "Green Tunnels" is about the boredom of a young girl on holiday with her family. "Nuns at Luncheon" is a story being told of a nun falling in love. The story mocks the writer's process, a concept Huxley used in his "Crome Yellow." Each story is read by the talented narrator, Simon Vance.