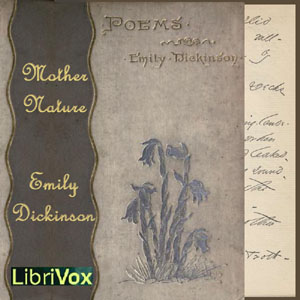 Download or Stream instantly more than 55,000 audiobooks.
Listen to "Mother Nature (Dickinson)" on your iOS and Android device.

LibriVox volunteers bring you 8 recordings of Mother Nature by Emily Dickinson. This was the Fortnightly Poetry project for June 3, 2013

While Emily Dickinson was a prolific private poet, fewer than a dozen of her nearly eighteen hundred poems were published during her lifetime. The work that was published during her lifetime was usually altered significantly by the publishers to fit the conventional poetic rules of the time. Dickinson's poems are unique for the era in which she wrote; they contain short lines, typically lack titles, and often use slant rhyme as well as unconventional capitalization and punctuation. Many of her poems deal with themes of death and immortality, two recurring topics in letters to her friends.
Mother Nature is a wonderful poem by Dickinson about nature. (Summary by SarahParshall and Wikipedia)