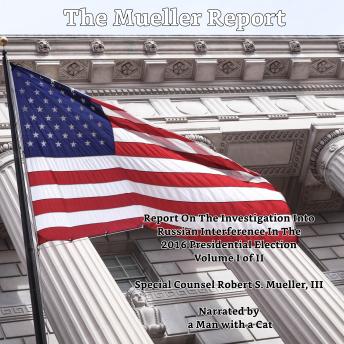 The Mueller Report, The - Volume I: Report On The Investigation Into Russian Interference In The 2016 Presidential Election

Download or Stream instantly more than 55,000 audiobooks.
Listen to "The Mueller Report, The - Volume I: Report On The Investigation Into Russian Interference In The 2016 Presidential Election" on your iOS and Android device.

Man With A Cat

This report is submitted to the Attorney General pursuant to 28 C.F.R. § 600.8(c), which states that , '[a]t the conclusion of the Special Counsel 's work, he shall provide the Attorney General a confidential report explaining the prosecution or declination decisions [the Special Counsel] reached.'
The Russian government interfered in the 2016 presidential election in sweeping and systematic fashion. Evidence of Russian government operations began to surface in mid-2016. In June, the Democratic National Committee and its cyber response team publicly announced that Russian hackers had compromised its computer network. Releases of hacked materials-hacks that public reporting soon attributed to the Russian government-began that same month.
Additional releases followed in July through the organization WikiLeaks, with further releases in October and November. In late July 2016, soon after WikiLeaks's first release of stolen documents, a foreign government contacted the FBI about a May 2016 encounter with Trump Campaign foreign policy advisor George Papadopoulos. Papadopoulos had suggested to a representative of that foreign government that the Trump Campaign had received indications from the Russian government that it could assist the Campaign through the anonymous release of information damaging to Democratic presidential candidate Hillary Clinton. That information prompted the FBI on July 31, 2016, to open an investigation into whether individuals associated with the Trump Campaign were coordinating with the Russian government in its interference activities.