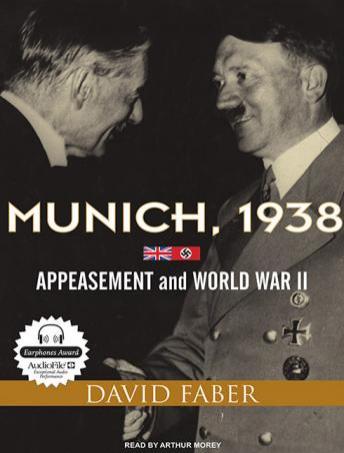 Download or Stream instantly more than 55,000 audiobooks.
Listen to "Munich, 1938: Appeasement and World War II" on your iOS and Android device.

On September 30, 1938, British Prime Minister Neville Chamberlain flew back to London from his meeting at Munich with the German chancellor Adolf Hitler and was greeted with a hero's welcome. As he paused on the aircraft steps, he held aloft the piece of paper, bearing both his and the Fuhrer's signatures, that contained the promise that Britain and Germany would never go to war with each other again. Later that evening, from his upstairs window at 10 Downing Street, he told the ecstatic and thankful crowd that he had returned bringing 'Peace with honor-Peace for our time.'

In this important reappraisal of the extraordinary events of seventy years ago, acclaimed historian David Faber traces the key incidents leading up to the meeting at Munich and its immediate aftermath. He describes Lord Halifax's ill-fated visit to Hitler; Chamberlain's secret negotiations with Mussolini, followed by the resignation of Foreign Secretary Anthony Eden; and the Berlin scandal that rocked Hitler's regime. Faber takes us to Vienna for the Nazi Anschluss; to the Sudentenland, the mountainous border region of Czechoslovakia, where Hitler's puppets attempted to provide him with a pretext for war by inciting the minority German population to rebellion; and to Prague, where the Czechoslovak government desperately tried to head off the Fuhrer's warlike intentions. In Berlin, we witness Hitler inexorably preparing for war, even in the face of opposition from his own generals; and in London, we watch helplessly as Chamberlain seizes executive control from his own cabinet and makes one supreme effort after another to appease Hitler, culminating in his three remarkable flights to Germany.

Drawing on a wealth of original archival material, including diaries and notes taken by Hitler and Chamberlain's translator, Faber's sweeping reassessment of the events of 1938 resonates with an insider's feel for the political infighting he uncovers. Packed with narrative punch and vivid characters, Munich, 1938 transports us to the war rooms and bunkers, revealing the secret negotiations and scandals upon which the world's fate would rest. It is modern history writing at its best.