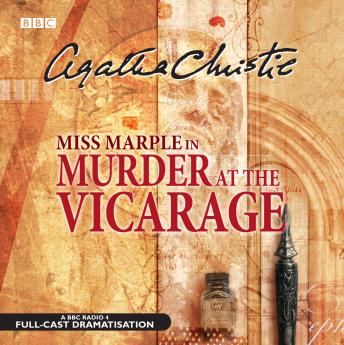 Murder At The Vicarage

Download or Stream instantly more than 55,000 audiobooks.
Listen to "Murder At The Vicarage" on your iOS and Android device.

In the sleepy little English country village of St Mary Mead, all is not as it seems. Under a seemingly peaceful exterior lurks intrigue, guilt, deception - and murder. Colonel Protheroe, local magistrate and overbearing landowner, is the most detested man in the village. Everyone, even the vicar, wishes he were dead. And very soon he is - shot in the head in the vicar's own study. A visiting artist confesses to the murder, but residents saw him elsewhere at the time the Colonel was shot. If he didn't do it, who did? Is he protecting the wife whom he loves? Faced with a surfeit of suspects, only the inscrutable Miss Marple can unravel the tangled web of clues. A trap is set, and Miss Marple's theory is put to the test when the true killer is finally unmasked. This full-cast dramatisation of Agatha Christie's very first Miss Marple mystery stars June Whitfield as the indomitable amateur detective, with Imelda Staunton and Nigel Davenport.