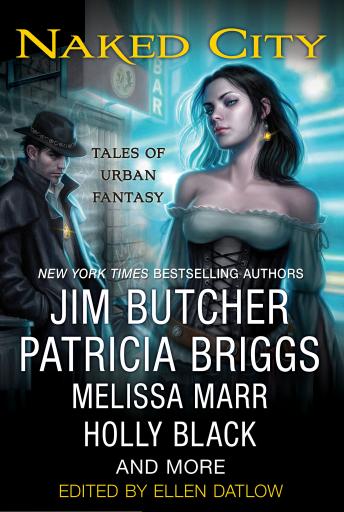 Download or Stream instantly more than 55,000 audiobooks.
Listen to "Naked City: Tales of Urban Fantasy" on your iOS and Android device.

Featuring original stories from 20 authors, this dark, captivating, fabulous and fantastical collection, Naked City, is not to be missed! Edited by award-winning editor Ellen Datlow.

In this thrilling collection of original stories some of today's hottest paranormal authors delight, thrill, and captivate readers with otherworldly tales of magic and mischief. In Jim Butcher's 'Curses' Harry Dresden investigates how to lift a curse laid by the Fair Folk on the Chicago Cubs. In Patricia Briggs' 'Fairy Gifts,' a vampire is called home by magic to save the Fae who freed him from a dark curse. In Melissa Marr's 'Guns for the Dead,' the newly dead Frankie Lee seeks a job in the afterlife on the wrong side of the law. In Holly Black's 'Noble Rot,' a dying rock star discovers that the young woman who brings him food every day has some strange appetites of her own.

Contents
Curses, by Jim Butcher
How the Pooka Came to New York City, by Delia Sherman
On the Side, by Richard Bowes
The Duke of Riverside, by Ellen Kushner
Oblivion by Calvin Klein, by Christopher Fowler
Fairy Gifts, by Patricia Briggs
Picking Up the Pieces, by Pat Cadigan
Underbridge, by Peter S. Beagle
Priced to Sell, by Naomi Novik
The Bricks of Gelecek, by Matthew Kressel
Weston Walks, by Kit Reed
The Projected Girl, by Lavie Tidhar
The Way Station, by Nathan Ballingrud
Guns for the Dead, by Melissa Marr
And Go Like This, by John Crowley
Noble Rot, by Holly Black
Daddy Longlegs of the Evening, by Jeffrey Ford
The Skinny Girl, by Lucius Shepard
The Colliers' Venus (1893), by Caitlin R. Kiernan
King Pole, Gallows Pole, Bottle Tree, by Elizabeth Bear