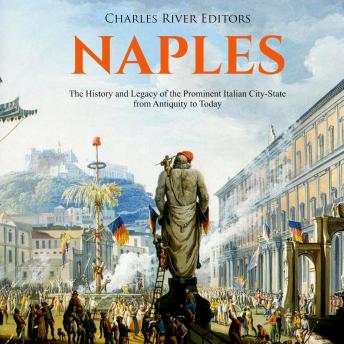 Naples: The History and Legacy of the Prominent Italian City-State from Antiquity to Today

Download or Stream instantly more than 55,000 audiobooks.
Listen to "Naples: The History and Legacy of the Prominent Italian City-State from Antiquity to Today" on your iOS and Android device.

The history of Naples is long and tortured, or at least for centuries that was how its history has been told.[1] Inhabited almost continuously from the Neolithic era to the present, Naples was founded by the Greeks and conquered by the Romans. After the fall of the Roman Empire, Naples passed between various foreign rulers for its entire history prior to Italian unification. Starting in 1040, when the Norman French invaders conquered Campania, Naples was ruled in a dizzying succession by Germans, then French, then Spanish, then Austrians, then Spanish, then French, and then Spanish.[2]
Although it is in many ways a microcosm of European history with a revolving door of conquerors, historians like to stress the unique status of Naples thanks to these diverse influences and unique geography. Set on a bay that provided a natural harbor, Naples is home to Mount Vesuvius, the only active volcano on the European mainland.[3] When Vesuvius erupts, the Neapolitans pay the price, and it has earned its reputation as the most dangerous volcano in the world. However, the threat posed by Vesuvius is tempered by a great benefit: Naples is blessed with extremely fertile soil.[4]
The natural harbor of Naples and its position on the southwest coast of Italy helps explain its history of multiple rulers, insofar as it made Naples a central locus of trade between Italy, Greece, Byzantium, North Africa, Spain, Holland, Flanders, and Germany. Due to its strategic importance, Naples reached high levels of prosperity, and for the same reason, it also suffered as various foreign powers vied for control of the city and the surrounding area.[5]