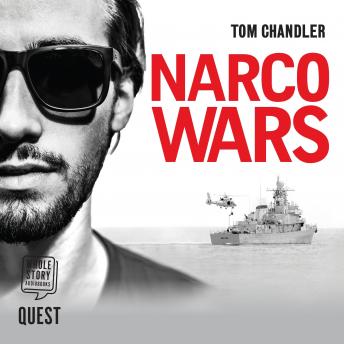 Download or Stream instantly more than 55,000 audiobooks.
Listen to "Narco Wars: The Gripping Story of How British Agents Infiltrated the Colombian Drug Cartels" on your iOS and Android device.

Tom Chandler arrived in Bogotá at the height of the cocaine boom. Pablo Escobar lay dead, the Cali Cartel had taken over much of the global supply, and an avalanche of coke was poised to hit Europe. Now the British government wanted Chandler and his team to do the impossible: infiltrate the most powerful crime syndicates on earth and stop their drug shipments.
It was a perilous assignment. The cartel bosses operated like a lethal multi-national, with armies of hitmen and myriad spies in ports, airports, police stations and government offices. Their intelligence systems flushed out turncoats and traitors, and they ruthlessly exterminated their enemies. Yet Chandler, an HM Customs investigator fluent in Spanish, knew he could only succeed by recruiting local informants, and went out into the field to find them. Within four years he had a network of fifty agents buried deep inside the trafficking organisations. The result was unprecedented. Their intel led to the arrest of hundreds of narcos and to the seizure of 300 tonnes of drugs, worth a staggering $3 billion.
Chandler's web disrupted the Bogotá mafia, who controlled the main airport and boasted they could put anything on a plane, from drugs to bombs; penetrated the go-fast crews who raced coke-laden speedboats to the transit station of Jamaica; dismantled the 'rip-on' teams who smuggled through the coastal ports; and identified the so-called motherships, the largest method of bulk transit ever discovered.
He faced appalling risks. Treacherous stool pigeons worked for both sides, and some of his Colombian law-enforcement colleagues were abducted, tortured and killed. Chandler too faced a grave threat when the crime lords learned he was responsible for a string of interdictions. Yet he persisted, driven to continue with the greatest series of sustained seizures ever made, until he finally burned out and his tour of duty came to an end. Two of his best sources were subsequently murdered, and his bosses dropped the entire overseas informant programme, with dire consequences.
Narco Wars is an unflinching story of danger fear and stress, and of the tradecraft and unsung heroism of the agents and their handlers.