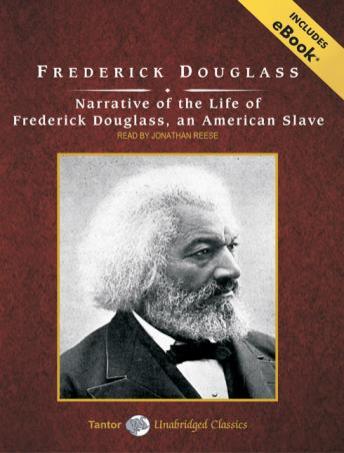 Narrative of the Life of Frederick Douglass, an American Slave

Download or Stream instantly more than 55,000 audiobooks.
Listen to "Narrative of the Life of Frederick Douglass, an American Slave" on your iOS and Android device.

Born into a life of bondage, Frederick Douglass secretly taught himself to read and write. For a slave, it was a crime punishable by death, but it resulted in one of the most eloquent indictments of slavery ever recorded. Douglass's autobiography traces his birth into slavery, his escape to the North, and the beginnings of the career that was to make him the preeminent spokesman for his people. His gripping narrative takes us into the fields, cabins, and manors of pre–Civil War plantations in the South and reveals the daily terrors he suffered as a slave.

Narrative of the Life of Frederick Douglass, an American Slave is one of the most influential autobiographies ever written. This classic text did as much as or more than any other book to motivate the abolitionists to continue to fight for freedom in America. Written more than a century and a half ago, this timeless classic still speaks directly to our age. It is a record of savagery and inhumanity that goes far to explain why America still suffers from the great injustices of the past.