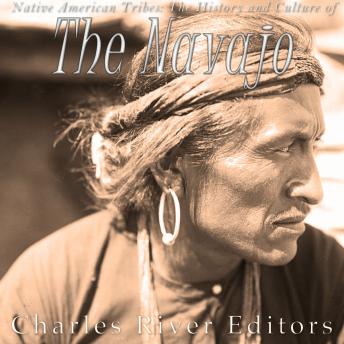 Native American Tribes: The History and Culture of the Navajo

Download or Stream instantly more than 55,000 audiobooks.
Listen to "Native American Tribes: The History and Culture of the Navajo" on your iOS and Android device.

From the “Trail of Tears” to Wounded Knee and Little Bighorn, the narrative of American history is incomplete without the inclusion of the Native Americans that lived on the continent before European settlers arrived in the 16th and 17th centuries. Since the first contact between natives and settlers, tribes like the Sioux, Cherokee, and Navajo have both fascinated and perplexed outsiders with their history, language, and culture. In Charles River Editors’ Native American Tribes series, readers can get caught up to speed on the history and culture of North America’s most famous native tribes in the time it takes to finish a commute, while learning interesting facts long forgotten or never known.

The Navajo are one of the most famous tribes in the United States, even though many of the important events in the people’s history have been overlooked with the passage of time. Still one of the biggest Native American groups in America, the Navajo are typically associated with the Southwest and other tribes like the Pueblo, and they are popularly remembered for the Code Talkers of World War II, who used the Navajo language to provide the American military with a code that could not be deciphered by enemy cryptologists.

Unfortunately, the 19th century was full of hardships for the Navajo, particularly as American settlers pushed west in the later stages of the 1800s. They engaged in conflicts with the Americans, but eventually they had to make the Long Walk, a march of over 300 miles from their homes to a reservation. Like the Cherokee’s Trail of Tears, the Long Walk was an unmitigated disaster for the Navajo, who only suffered more adversity in the years after the Long Walk as their lands and livelihoods were reduced.

Nevertheless, the Navajo have successfully maintained their culture and traditions, which are some of the oldest and richest in North America, as evidenced by the Code Talkers in the 1940s. As anthropologists and scholars become more refined, they have been able to trace the Navajo’s history and identity in ways that allow them to compare and contrast to neighboring Native American groups, which has led to a better understanding of their ancestors as well.

Today, the Navajo people are the second largest federally-recognized tribe of the United States with over 300,000 members, which represents over 15% of the total Native American population in America. Native American Tribes: The History and Culture of the Navajo comprehensively covers the culture and history of the famous tribe, profiling their origins, their famous leaders, and their lasting legacy.