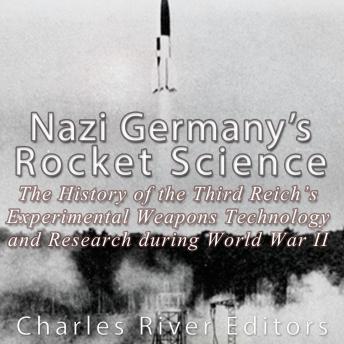 Download or Stream instantly more than 55,000 audiobooks.
Listen to "Nazi Germany's Rocket Science: The History of the Third Reich's Experimental Weapons Technology and Research during World War II" on your iOS and Android device.

After the last shots of World War II were fired and the process of rebuilding Germany and Europe began, the Western Allies and the Soviet Union each tried to obtain the services of the Third Reich's leading scientists, especially those involved in rocketry, missile technology, and aerospace research. Naturally, this was a delicate affair due to the fact many of the German scientists were not only active Nazis but had helped the Nazi war machine terrorize the world. At the same time, by the late war period, the Anglo-American Allies formed a clear picture of the Soviet state. Though forced to ally with the USSR's dictator, Josef Stalin, the West came to understand Communist Russia represented yet another hungry totalitarian power, and thus a very real threat to an independent Europe.

Both the Western Allies and the Soviets knew of Adolf Hitler's V-2 rocket program, the forerunner of ballistic missiles and the space race. Each recognized the immense strategic value of these technologies and wished to secure their benefits for themselves. As the Soviets contemplated additional expansion following the “Great Patriotic War” and the U.S. military came to understand the putative allies of today would emerge as the enemies of tomorrow, the men possessing knowledge of the V-2 rockets and other Third Reich military technology programs became seen as crucial pieces in the incipient NATO versus Warsaw Pact standoff.

The result was the American-led “Operation Paperclip” on the Western side, which resulted in German scientists putting their expertise at the disposal of the U.S. and other NATO members. Operation Paperclip aimed not only to obtain the benefits of German scientific advances for the United States but also to deny them to the potentially hostile Soviets.

The Western approach, however self-interested, typically met with voluntary compliance on the German scientists' parts. In contrast, the Soviet answer to Paperclip, Operation Osoaviakhim, used the implied threat of imprisonment, torture, and death, the characteristic tools of Stalinist Russia, to coerce assistance from German scientists and engineers following the war. These men yielded rich dividends to the Soviet state in terms of achieving at least temporary technical parity with the USSR's western rivals.

To say Operation Paperclip had a profound impact on the Cold War and American history would be an understatement. The most well known example of the operation’s “success” is Wernher von Braun, who was once a member of a branch of the SS involved in the Holocaust, would become known as the “father of rocket science” and fascinate the world with visions of winged rockets and space stations as a “new” Manhattan Project, one that NASA would eventually adopt. And in addition to the weaponization of ballistic missiles that progressed throughout the Cold War, von Braun’s expertise was used for America’s most historic space missions.

Nazi Germany’s Rocket Science: The History of the Third Reich’s Experimental Weapons Technology and Research during World War II analyzes the Nazis’ technological advances and the covert attempts to import Nazi scientists after the fall of the Third Reich.