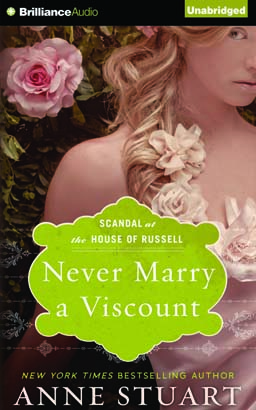 Download or Stream instantly more than 55,000 audiobooks.
Listen to "Never Marry a Viscount" on your iOS and Android device.

She’s crept back into the home she lost. He’s crept into her heart.

Sophie Russell was once society’s darling. But after the disgrace and death of her father, she now finds all doors firmly shut to her—including those of her family home. To discover the secrets now hidden within its beloved walls, she’ll pose as a cook and spy on the estate’s new owner, a broodingly handsome viscount, who may have schemed against the Russells. Instead of dishing up the truth, the viscount tempts Sophie with delicacies of his own…

Viscount Griffiths suspects that there is more to his new cook than meets the eye—especially since it was a mistress he hired sight unseen, not a cook. With the hope that her passion in the kitchen will extend to his bedchamber, he humors the beautiful interloper. But when that passion burns to brightest love, revelations may shake both of their wary hearts…

The final sensuous book in the Scandal at the House of Russell trilogy will lay the truth bare.