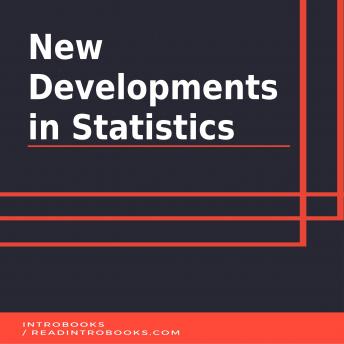 Download or Stream instantly more than 55,000 audiobooks.
Listen to "New Developments in Statistics" on your iOS and Android device.

Statistics has been derived from the Latin word 'status, an Italian word 'statist' or a German word 'Statistic', all of which means a 'political state'. The use of statistics has been employed in various fields like biostatics, agriculture, economics, sociology, business management etc.

The field of statistics is not afresh, and its beginning can be dated back to the times of the beginning of the human activities. However, the utilization of statistics has increased over the years when it first began to be used. In the earlier times statistics was referred to as the science of statecraft and was used for collecting data related to population count in the ruler's area, crime, mortality, income, birth rate and was also used for keeping a track of the key events of the time for administrative purposes. However, in the modern times, the use of statistics has been employed in a variety of fields. Its use has been extended in the areas of formulation and prediction of future plans and policies of the state administration.

The importance of statistics has subsequently increased over all these passing years. It is because of the benefits that it provides to the user. The statistical findings have made assumption of anomalous information easy. In fact, the use of the statistical thinking has become necessary for the citizens.