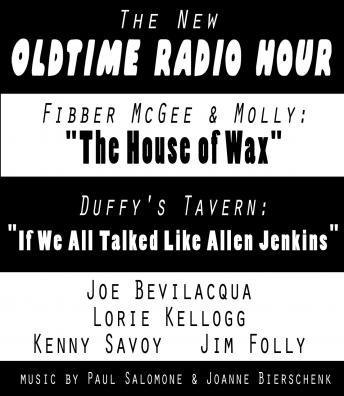 Download or Stream instantly more than 55,000 audiobooks.
Listen to "The New Oldtime Radio Hour: "Fibber McGee" and "Duffy's Tavern"" on your iOS and Android device.

This hour of comedy was recorded before a live audience at SUNY Dutchess in Poughkeepsie, New York on March 20, 2007.

Fibber McGee and Molly in ""The House of Wax""
It's 1953 when Throckmorton P. Gildersleeve makes a less than triumphant return to Wistful Vita to introduce Vincent Price at the Wistful Vista Bijou premiere of the 3-D movie ""The House of Wax"". Meanwhile, Fibber tries to save five cents by making his own 3-D glasses. Teeny, Mr. Oldtimer, Wally Wimple, Mrs. Uppington, Harlow Wilcox, and even Fibber's closet... are all there in this brand ""Fibber"" tale!

Duffy's Tavern: ""If We All Talked Like Allen Jenkins""
Archie, Finnegan, Eddie, Miss Duffy and all the gang are back ""where the elite meet to eat"" in this first new ""Duffy's Tavern"" outing since 1952. Archie tries to lure the Shriner's Convention to the tavern with promises of big stars he can't deliver, not knowing the real Warner Brothers movie actors Edward G. Robinson and Allen Jenkins are hiding in the kitchen.