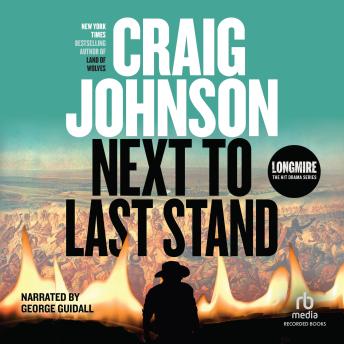 Next to Last Stand

Download or Stream instantly more than 55,000 audiobooks.
Listen to "Next to Last Stand" on your iOS and Android device.

One of the most viewed paintings in American history, Custer's Last Fight, copied and distributed by Anheuser-Busch at a rate of more than a million copies a year, was destroyed in a fire at the Seventh Cavalry headquarters in Fort Bliss, Texas, in 1946. Or was it? When Charley Lee Stillwater dies of an apparent heart attack at the Veterans' Home of Wyoming, Walt Longmire is called in to try to make sense of a partial painting and a Florsheim shoebox containing one million dollars, both found in Stillwater's foot locker, sending the good sheriff on the trail of a dangerous art heist. Walt is fond of the veterans who sit outside the home and wave at passing cars, and he felt a particular kinship with Charley Lee, making him all the more eager to untangle the mystery of the deceased man's belongings. As he follows the money- encountering some nefarious characters along the way-Longmire strives to make sure that this investigation doesn't become his own next to last stand. Craig Johnson is the New York Times bestselling author of the Longmire mysteries, the basis for the hit Netflix original series Longmire. He is the recipient of the Western Writers of America Spur Award for fiction, and his novella Spirit of Steamboat was the first One Book Wyoming selection. He lives in Ucross, Wyoming, population twenty-five. George Guidall's 40-year career in the theatre includes leading roles on Broadway, Off-Broadway, and in regional theatres across the country. The recipient of an Obie Award, he has appeared in over 75 productions ranging from Shakespeare to Neil Simon. One of the audiobook industry's most acclaimed readers, Guidall received Audie Awards for his performances of A Widow for One Year and I Know This Much Is True.