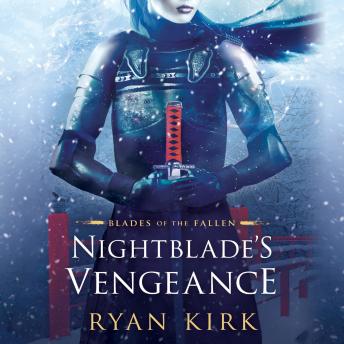 Download or Stream instantly more than 55,000 audiobooks.
Listen to "Nightblade's Vengeance" on your iOS and Android device.

In a thrilling fantasy series from the author of the Nightblade novels, revenge becomes a quest for a young female warrior. In a feudal land, a Kingdom is at risk.

With no heir to the fragile throne, its future rests with the powerful members of the dying king's Council, including Minori, a nightblade warrior, and Kiyoshi, a dayblade healer. The two men are bound by the sword but divided by two opposing principles: rule the land, or serve it. In their challenge for supremacy, a spark has been lit. Her name is Asa. Her creed is revenge.

A fierce nightblade warrior, she's spent a decade in pursuit of the enigmatic general who killed her father in a violent revolt-then mysteriously vanished from all records. Now, her desire for reckoning has led her to the village of Two Falls-and straight into the heart of an impending civil war. Minori and Kiyoshi are vying for her loyalty. And Asa must choose sides.

As fresh betrayals unfold and a new uprising looms, Asa knows that chasing a ghost is no longer just a personal quest for retribution. It's going to alter the fate of the entire Kingdom.