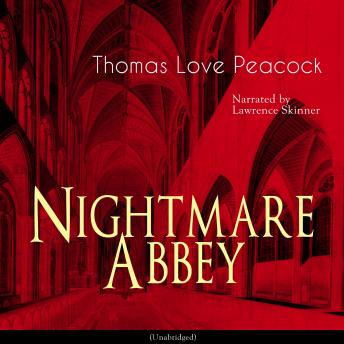 Download or Stream instantly more than 55,000 audiobooks.
Listen to "Nightmare Abbey: Unabridged" on your iOS and Android device.

Nightmare Abbey is a Gothic satire about the romantic movement in contemporary English literature, its morbid subjects, misanthropy and transcendental philosophical systems. Most of the characters are based on historical figures whom Peacock wishes to ridicule. The main character is Christopher Glowry, Esquire, a morose widower who lives with his only son in his shabby family mansion. Mr. Glowry has servants with long faces or dismal names such as Raven, Graves or Deathshead. The few visitors he welcomes are mostly of a similar cast of mind: a transcendental philosopher; a Manichaean Millenarian; his son's languid and world-weary college friend; and a misanthropic poet. The only exception is the sanguine Mr. Hilary, who, as Mr. Glowry's brother-in-law, is obliged to visit the abbey from family interests. And there is Reverend Mr. Larynx, the vicar of nearby Claydyke, who readily adapts himself to whatever company he is in. Artist Bio Author: Thomas Love Peacock (1785-1866) was an English novelist, poet, and official of the East India Company. He was a close friend of Percy Bysshe Shelley and they influenced each other's work.