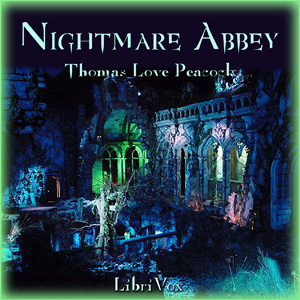 Download or Stream instantly more than 55,000 audiobooks.
Listen to "Nightmare Abbey" on your iOS and Android device.

Deep in the fens of the British coast sits the gloomy mansion that goes by the name Nightmare Abbey. It is inhabited by persons of very low opinion of the human race, and in fact they pride themselves in the depths of their detestation. Others of its denizens believe the ultimate exercise and product of the human mind ought to be chaos. Now let the young master of the house get snared by the wiles of a beautiful young lady. And for good measure, toss in another beautiful young lady. Now Scythrop (named in honor of an ancestor who became bored with life and hanged himself) is about to find that two such make too much of a good thing! Peacock wrote Nightmare Abbey as a satire, and he has folded in allusions to or quotations from literally dozens of other works. He makes use of many long, impressive-sounding words (some of which he very possibly made up!). Ignore these and his occasional Latin phrase, treat the rest as a farce, and you're on track for a fun listen!(Summary be Mark F. Smith)