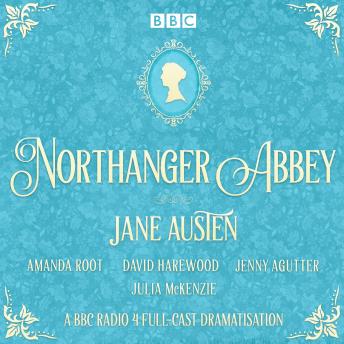 Download or Stream instantly more than 55,000 audiobooks.
Listen to "Northanger Abbey: A BBC Radio 4 full-cast dramatisation" on your iOS and Android device.

In this BBC radio full-cast dramatisation of one of Jane Austen's most beloved works, Catherine Morland's overactive imagination makes her life more complicated than she would have wished...

Catherine is obsessed with Gothic novels, often getting swept up by her taste for the dramatic and tragic. Did Mrs Tilney really die nine years previously, or has she been murdered or imprisoned in her chambers this whole time?

Meanwhile she is torn between two suitors, the handsome and clever Henry Tilney and the arrogant John Thorpe....

Published over 200 years ago, Northanger Abbey remains one of the British nation's favourite novels. Among the star cast in this radio production are Amanda Root, David Harewood, Julia McKenzie, and Jenny Agutter.