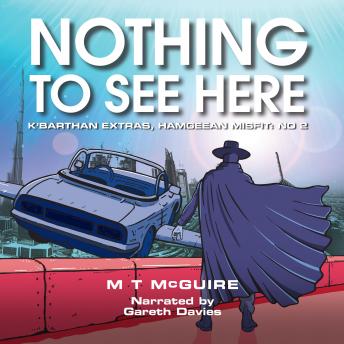 Nothing To See Here

Download or Stream instantly more than 55,000 audiobooks.
Listen to "Nothing To See Here" on your iOS and Android device.

The world is crying out for a hero ... pity they're all busy.

It’s midwinter and preparations for the biggest religious festival in the K’Barthan year are in full swing. Yes, even though, officially, religious activity has been banned, no-one’s going to ignore Arnold, The Prophet’s Birthday, especially not Big Merv. He orders The Pan of Hamgee to deliver the traditional Prophet’s Birthday gift to his accountants and lawyers. As usual, The Pan has managed to elicit the unwanted attention of the security forces. Can he make the delivery and get back to the Parrot and Screwdriver pub in time for an unofficial Prophet’s Birthday celebration with his friends?

Nothing to See Here is book 2 in a series, but can be read as a stand alone story.

Estimated UK film rating of this book is: U (universal) or G (general).

INTERVIEW WITH THE AUTHOR

Q – Tell us about this series. Why did you write it? Why is it special?

A – There's a saying, somewhere, that if the book you want to read hasn't been written, you must write it. A lot of it is a homage to the things I love: StarWars, Adams, Pratchett, Dr Who, StarTrek: comedic sci fi or fantasy.

Hopefully, anyone reading will like the same things as I do: the world building, the characterisation, what, I hope, is pithy, witty dialogue (or dialog) and of course, characters who are flawed and stuff up, and are not beautiful, misfits, ne’r do wells etc. There's not one skinny woman in a leather jumpsuit anywhere in this series. I like writing characters who have zero combat skills, putting them in a situation where they could really do with knowing how to fight and seeing how they cope with nothing but their wits - I'm mean like that. ... Oh and of course the snurds. You've gotta love a flying car, right?