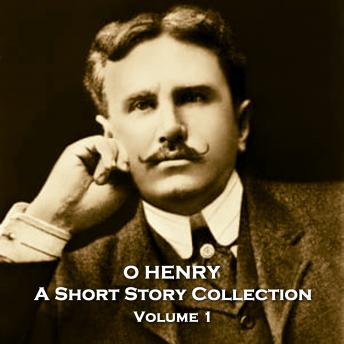 Download or Stream instantly more than 55,000 audiobooks.
Listen to "O Henry - A Short Story Collection - Volume 1" on your iOS and Android device.

William Sydney Porter was born on 11th September 1862 in Greensboro, North Carolina. At age 3 his mother died from tuberculosis. From an early age it was clear Porter had a large appetite for reading as he absorbed the world around him.He first attended at a school run by his aunt before enrolling at the Lindsey Street High School and then worked at his uncle's drugstore and gained a pharmacists' license in 1881. A persistent cough took him to Texas in the hope that a change of climate would help his symptoms. He took on various types of work, initially from ranch hand and cook and then as varied as pharmacist, draftsman, bank teller and journalist. He also began to write, though for now, purely as a hobby.He was a member of several singing and dramatic groups when he met 17 year old Athol Estes, daughter of a wealthy Austin family. Despite her mother's objection owing to Athol's tuberculosis, they began courting and in July 1887, they eloped and soon married.Athol, impressed by his writing, encouraged him to get them published. A job as a draftsman at the Texas General Land Office paid a healthy $100 dollars per month and life was good.But then life turned cruel. His son died a few hours after birth although a daughter, Margaret, came the following year. His job had to be vacated but another was found at the First National Bank of Austin. The bank operated informally and Porter was careless in keeping the books. He lost that job but began writing for the humourous weekly The Rolling Stone and the Houston Post. Some time later the federal Bank auditors went through his former accounts and he was arrested on charges of embezzlement.Porter fled the day before his trial to Honduras. Holed up for several months he began to write. Athol had become too ill to travel to meet him and learning that her health was deteriorating he surrendered to the court in February 1897. Bail was obtained so that he could stay with Athol during her final days. Porter was sentenced to five years at the Ohio Penitentiary in Columbus. His pharmacy qualifications got him the job of night druggist. His sentence also gave him time to write and publish fourteen short stories. In December 1899 in McClure's Magazine he published a short story as O Henry. He was released two years early in July 1901, and reunited with Margaret, now 11, in Pittsburgh. He now began his most prolific period of writing; a short story per week for the New York World, while also publishing works in other magazines. Eventually over 600 of his short stories were published.Porter was a heavy drinker and in 1908 his health, which had deteriorated for several years, took a dramatic turn for the worse, as did his writing. O Henry died of cirrhosis of the liver complicated by diabetes and an enlarged heart on 5th June 1910.1 - O Henry - A Short Story Collection - An Introduction - Volume 12 - The Gift of the Magi by O Henry3 - A Harlem Tragedy by O Henry4 - According to Their Lights by O Henry5 - After Twenty Years by O Henry6 - Two Thanksgiving Day Gentlemen by O Henry7 - Transients in Arcadia by O Henry8 - The Cop and the Anthem by O Henry9 - The Caballero's Way by O Henry10 - The Count and the Wedding Guest by O Henry11 - The Dream by O Henry12 - The Furnished Room by O Henry