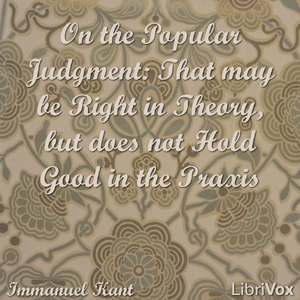 On the Popular Judgment: That may be Right in Theory, but does not Hold Good in the Praxis

Download or Stream instantly more than 55,000 audiobooks.
Listen to "On the Popular Judgment: That may be Right in Theory, but does not Hold Good in the Praxis" on your iOS and Android device.

This tripartite essay – published variously as “On the Popular Judgment” (J. Richardson trans.), “On the Old Saw” (E.B. Ashton trans.), or “On the Common Saying” (both M.J. Gregor and H.B. Nisbet) – Kant takes up the issue of the relation of theory to practice in three distinct ways. In the first, he replies to Christian Garve’s criticism of his moral theory, in the second, he distances himself from Thomas Hobbes, and in the third, Moses Mendelssohn.

The three taken together are representative of the breadth of Kant’s moral and political thought; the first section being concerned with the individual, the second with the state, and the third with the species. Although this is, on the whole, a difficult piece to approach, the second and third sections are often read as a way into Kant’s political thought, and serve this purpose well, especially when read alongside his Perpetual Peace. (Summary by D.E. Wittkower.)