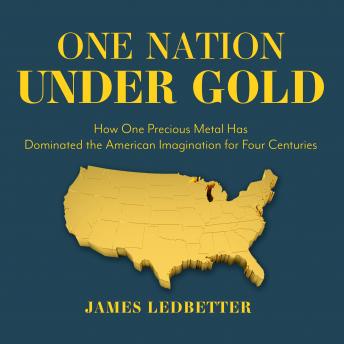 One Nation Under Gold: How One Precious Metal Has Dominated the American Imagination for Four Centuries

Download or Stream instantly more than 55,000 audiobooks.
Listen to "One Nation Under Gold: How One Precious Metal Has Dominated the American Imagination for Four Centuries" on your iOS and Android device.

Worshiped by Tea Party politicians but loathed by sane economists, gold has influenced American monetary policy and has exerted an irrational influence on the national psyche for centuries. It is an existential quest that extends to today, as millions of investors remain entranced by the metal, and as right-wing presidential candidates present it as the antidote to our economic woes. Acclaimed author James Ledbetter traces the origins of our national obsession, revealing how gold's sacred status dates from precolonial days when conquistadors fanatically searched the New World for the gilded city of El Dorado. From William Jennings Bryan's legendary Cross of Gold speech of 1896, to FDR's ban on private gold ownership, to Nixon's 1971 decision to float the dollar and detach it from gold, Ledbetter's 'really superb treatment' (Julian Zelizer) expertly explores the controversies around this hallowed metal, investigating for the first time what our centuries-long fixation ultimately reveals about the American identity.