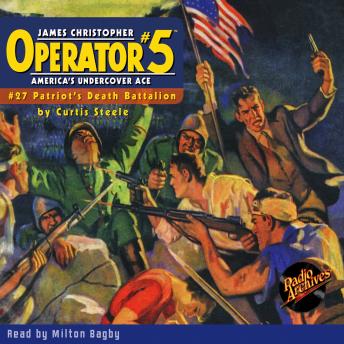 Download or Stream instantly more than 55,000 audiobooks.
Listen to "Operator #5 #27 Patriot's Death Battalion" on your iOS and Android device.

America, from the Atlantic Ocean to the Mississippi River, has been washed in blood by the ruthless war hordes of the invader, Rudolph I. On the banks of the mighty Father of Waters the American people, poorly armed, ragged and desperate, are making a last stand. But as rumors reach them of the bloody slaughter to the east, as the heavens fill swiftly with thousands of enemy planes, and they sense the insidious treachery developing among their own military leaders, their grim courage begins to weaken. Their only hope lies in Operator 5 - and he, a victim of internal treachery, has disappeared! The Purple Invasion was an epic tale that recast not only Jimmy Christopher, but the world itself. Once a secret agent, Jimmy was now something new, a hero forged in war. The reimagining of the concept and character definitely worked. Operator #5 was promoted back to monthly status. The good news was not so great for beleaguered Jimmy Christopher. The Intelligence Service smashed, he was appointed leader of the resistance army as, novel by novel, the Nazi-like invaders gobbled up one region of America after another, virtually unchecked. Over the course of 1936 through 1938, Jimmy and his comrades waged a series of bloody battles in open-ended exploits such as Liberty's Suicide Legions, Siege of the Thousand Patriots, and The Army Without a Country. The fall of America seemed certain. From the Atlantic to the Mississippi the brutal conqueror is subjecting millions to his merciless, bloody reign of terror - and his ruthless gray-clad hordes are steadily sweeping westward, leaving a vast path of death and destruction in their wake... Faced with the surrender of America's army, only Jimmy Christopher and a pitiful handful of desperate men stand between the Mad Emperor and his bloody conquest of the nation... Patriots' Death Battalion is read with stirring intensity by Milton Bagby