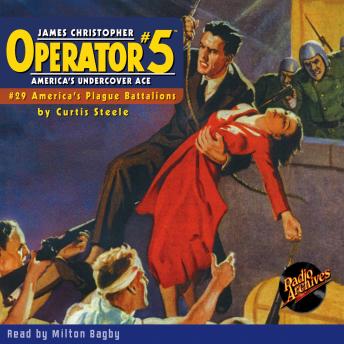 Download or Stream instantly more than 55,000 audiobooks.
Listen to "Operator #5 #29 America's Plague Battalions" on your iOS and Android device.

The United States forces have been driven to their last, desperate stronghold before the blood-maddened ruthless hordes of the self-styled emperor, Rudolph I, even as a courageous but blind nation, wrapped in the dreams of false security, had practiced the foolish doctrine of "It can't happen here!" America's patriotic Death Battalion was the last ragged hope of embattled patriots - the women of the nation who hurled themselves bravely and futilely against the war-mad forces of the Purple Invaders. When they fell before the terror-inspiring and deadly barrage of cholera bombs, a few stricken survivors turned for their hope of averting ultimate disaster to one man - Jimmy Christopher - who, as Operator #5, was to face the most overpowering and deadly odds in all his embattled career! The saga of Jimmy Christopher, otherwise known as Operator #5 of the United States Intelligence Service, had been a busy routine of defeating enemies, both foreign and domestic, each and every month. It wasn't easy, but the Intelligence ace made it look like it was all in a month's work. When Frederick C. Davis left Operator #5, Popular Publications immediately replaced him with Emile C. Tepperman, who picked up where Davis left off, spinning slightly more hard-boiled exploits of Jimmy Christopher than had appeared before. And then, Tepperman threw Christopher and the world into the Purple Invasion. It was inconceivable that America should ever bow beneath the heel of an invading tyrant. When even the women of the nation had hurled themselves against the enemy in a last desperate effort to stay his irresistible progress, America staggered under the most paralyzing blow of all - the devastating barrage of the cholera bombs... What could one man - even though he be the veteran Jimmy Christopher, Operator #5 - do against such odds? America's Plague Battalions is read with stirring intensity by Milton Bagby.