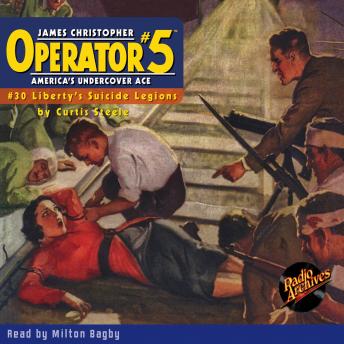 Download or Stream instantly more than 55,000 audiobooks.
Listen to "Operator #5 #30 Liberty's Suicide Legions" on your iOS and Android device.

Purple armies from the prairies and a great Purple navy looming over the western horizon made ready to clamp the fetters of slavery on America's last defenders. But a grim line of fighting men waited in the Emperor Rudolph's path with a soldierly serenity that said, "Here we die." And every life laid on this altar of freedom gave Jimmy Christopher, Operator #5 of the Intelligence Service, new respite as he followed a trail of desperate adventure studded with disgrace and death. After two years, Frederick C. Davis, the original author behind Operator #5, grew tired of saving the United States through his surrogate hero, and bowed out. His editors required that he write under the house name of Curtis Steele, so readers didn't notice when Emile C. Tepperman and then Wayne Rogers took over the series. Tepperman became famous for breaking the monthly menace format, and launching a continuing serial revolving around the Purple Invasion, wherein a Hitlerian Axis of European powers actually succeeds in conquering America, forcing Jimmy Christopher and his courageous crew into the roles of ragged guerrillas desperately battling to reclaim the nation, state by state. Fans have dubbed this thirteen-part saga, "The War and Peace of the pulps." In the far reaches of High Asia, the Purple Empire had set up its factories and its smelters, to forge the most powerful weapon yet devised in military history. That weapon was a fleet of super-dreadnoughts equipped with a strange secret device to render our Defense Force helpless... In this gripping novel of the historic Purple Invasion, giant guns ashore and turret magic at sea hurl death at America's crumbling bulwarks as intrigue knifes the stout defenders. And Operator #5, Secret Service ace, becomes a man without a country, with death and disgrace as his only reward. Liberty's Suicide Legions is read with stirring intensity by Milton Bagby