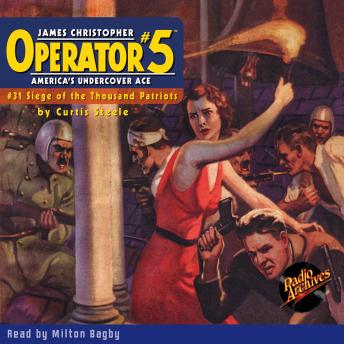 Operator #5 #31 Siege of the Thousand Patriots

Download or Stream instantly more than 55,000 audiobooks.
Listen to "Operator #5 #31 Siege of the Thousand Patriots" on your iOS and Android device.

Sweeping westward down the Pacific slope, the Purple Emperor's invading armies thundered to trap the last defending Americans between flaming guns and an ocean grave. Operator #5, with the audacity of desperation, launched a forlorn hope - a dazzling daring raid into the heart of the enemy's lines. Here is the tale of the mad dash of his pitifully heroic handful of volunteers toward the great gun works where he might snatch victory from defeat. Working for Agent Z-7, head of an unnamed branch of U. S. Intelligence in the decade before the C. I. A. was ever envisioned, Operator #5 was assisted by newspaper reporter Diane Elliott, a two-fisted street kid named Tim Donovan, as well as his twin sister, Nan Christopher. Jimmy's father, a retired operative himself, often backed him up with sound advice on the fine art of counter-espionage. Operator #5 magazine ran clear to the Fall of 1939. Jimmy Christopher was in the middle of beating off yet another ongoing invasion by a renamed Japanese Empire when World War II broke out in Europe. With the fires of war threatening to engulf the world in reality, Popular Publications wisely or unwisely decided that the struggles of Jimmy Christopher no longer represented escapist fiction, and quickly folded the title. Soon enough, its loyal readers would be involved in the spreading struggle of total war. But until then... Conquering the Rockies, the Purple Emperor's great war machine rolled on to crush the last vestige of American resistance. Operator #5, seeing his cause already lost, decided upon the incredibly daring, typically American action - of a counter attack! Listen to his mad, secret sortie through enemy territory - across two thousand miles of hell to the guns and ammunition which alone could stave off defeat. Siege of the Thousand Patriots is read with stirring intensity by Milton Bagby