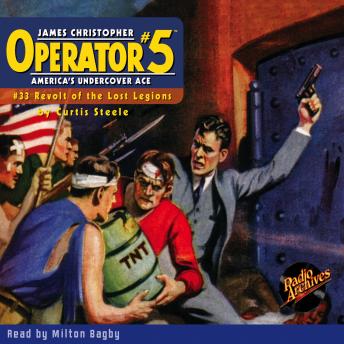 Operator #5 #33 Revolt of the Lost Legions

Download or Stream instantly more than 55,000 audiobooks.
Listen to "Operator #5 #33 Revolt of the Lost Legions" on your iOS and Android device.

The guillotine rose and fell, and American patriots died for daring to defy the Purple invader, supreme from the Atlantic to the Pacific. In sun-bleached Death Valley, Operator #5's outlawed, ragged army chafed within the cordon of the great Purple army. Only a military miracle would arouse despairing Americans and free those lost legions... To make possible that miracle, Operator #5 gambles boldly with Death at the very heart of Emperor Rudolph's colossus of strangling steel. In 1934, with Hitler consolidating power in Germany and the Japanese Empire on the rise in Asia, young pulp publisher Harry Steeger decided that the American public was ready for a magazine chronicling the exploits of an undercover agent dedicated to defending the United States from foreign aggressors. With his editors, Steeger came up with a title, Secret Service Operator #5, and a cover depicting a masked terrorist fleeing an exploding White House. Over this loomed the resourceful hero, blazing away with a .45 automatic. His job: to defeat a new invasion of the United States - every month! The trouble the real world was in would have an even bigger impact on Operator #5 than inspiring Steeger initially. When the story telling hit a lull and it seemed nothing more could be done with Jimmy Christopher, writer Emile Tepperman turned the whole concept on its ear, thrusting Operator #5 and the world into the unprecedented Purple Invasion. The grim banner of the Purple Empire was flaunted over America from coast to coast. Americans labored in chains for the blood-maddened Emperor Rudolph. All hope seemed lost. But one man - Operator #5 - clung to the vision and the courage to fight for an America once more free. Facing dismaying perils, he snatched the Purple Emperor's own weapons to fire the spark of battle in a mighty nation! Revolt of the Lost Legions is read with stirring intensity by Milton Bagby.