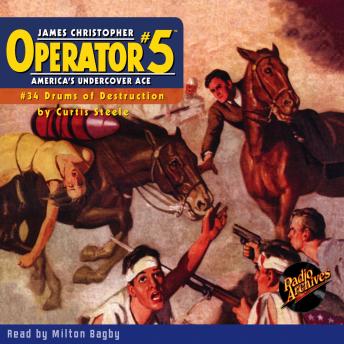 Download or Stream instantly more than 55,000 audiobooks.
Listen to "Operator #5 #34 Drums of Destruction" on your iOS and Android device.

They thundered through the high passes of the Continental Divide, those rolling drums of doom, heralding the attack of the Purple Emperor's mighty armies which had conquered all of Eastern America to the Rockies. Rallying to hold the Divide, Operator #5, alone with a handful of weary, starving defenders, pits himself against Rudolph's unconquered destroying hordes, his only weapon the strategy of bold and desperate men with their backs to an alien seat. Originally written by master pulpsmith Frederick C. Davis, Operator #5 was a clear forerunner of the spy genre, which exploded in the 1960s when President John F. Kennedy happened to remark that he enjoyed reading Ian Fleming's James Bond novels. Soon, America was surrounded by spies. The Man from U.N.C.L.E., Our Man Flint, and Nick Carter, Killmaster were just a few of the most prolific. Jimmy Christopher was on the job a generation before them all, blazing the espionage trail, and keeping America safe from fascism and other wicked isms. What makes Operator #5 richer than even those characters, however, is how well the concept handled the hard left turn of the Purple Invasion. Jimmy's transition from spy to rebel leader not only worked, but it made this rather run of the mill character a Pulp classic and affected pulp storytelling thereafter. The goose-stepping armies of the Purple Emperor massed in the passes of the Continental Divide, ready to swoop down upon the last defenders of American soil and drive them relentlessly westward into the sea. Grimly the besieged force, without guns or supplies, awaited the attack they could not hope to hold off. Then Operator #5 played his last card - a daring dash into the Occupied Territory, where his life was worth a province to the man who could deliver him into the eager hands of a torture-mad emperor! Drums of Destruction is read with stirring intensity by Milton Bagby. Originally published in the July-August 1937 issue of Operator #5 magazine.