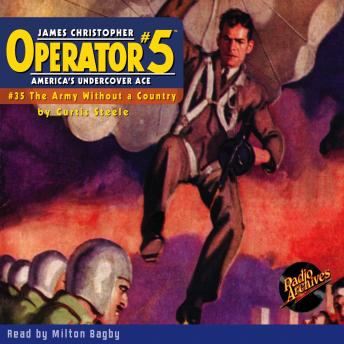 Operator #5 #35 The Army Without a Country

Download or Stream instantly more than 55,000 audiobooks.
Listen to "Operator #5 #35 The Army Without a Country" on your iOS and Android device.

America's Defenders wavered at the Divide before those trenches of the Purple Empire hordes - checked by a living wall of crucified children! How could they gain victory without massacring their own? And how could Operator #5 avert this total annihilation of the nation's young? From behind that human barricade, the mad Emperor's legion poured out death, secure in its ghastly strategy. There was but one way of overthrowing the invaders, terrible though its cost. Into the jaws of destruction marched the men who knew how to die - then miraculously attack again! "The basic concept of Operator #5 came from Harry Steeger, the publisher, or Rogers Terrill, the editor, or both," original Operator #5 author Frederick C. Davis recalled. "It was that Operator #5 must save the United States from total destruction in every story, every month. When I was called in to start the series Terrill already had a cover illustration-the White House being blown up. I did the first Operator #5 around this picture." From that initial outing, Jimmy Christopher did exactly that in each and every story, rescuing the world from destruction in one and done tales. That is, until Emile Tepperman took over writing duties and thrust Operator #5 into The Purple Invasion. What followed was a serialized 13 chapter pulp war epic like none before or since. From secret agent to rebel soldier, Jimmy Christopher's job mission did not change. The desperate defenders of America went over the top against the vandal hordes of the Purple Emperor at the Continental Divide - only to find that the murder-maniac tyrant had protected his trenches with a living wall of America's youth hung upon crosses! It was then that Operator #5 had to find the way to strike at the enemy - and also rescue, from a blood-mad jaguar's cage, the girl who guarded a nation's secret! The Army Without a Country is read with stirring intensity by Milton Bagby. Originally published in the September-October 1937 issue of Operator #5 magazine.