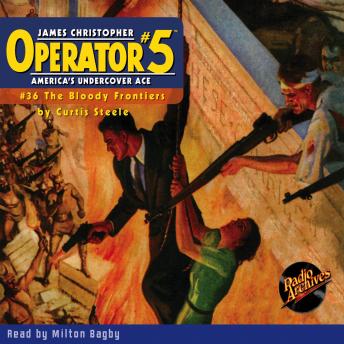 Download or Stream instantly more than 55,000 audiobooks.
Listen to "Operator #5 #36 The Bloody Frontiers" on your iOS and Android device.

Helpless America had been hurled back into the abysmal dawn of history, by those guerilla bands of the Purple Emperor, which had been loosed in fury and hate to put civilization to fire and sword. Across the Hudson, slaying as they came, advanced the Gothic hordes which would sack the nation's great metropolis. And only Operator #5, racing against time and fate, could hope to challenge this new, grim menace which threatened the entire world with primitive darkness! For nearly two years, writer Frederick C Davis was content to grind out monthly Operator #5 novels under the house pseudonym of Curtis Steele. A long-time pulp veteran, Davis was much in demand, and discovered that writing Operator #5 novels every month on top of his other fiction was becoming too much of a strain. So, perhaps reluctantly but perhaps not, Davis dropped the series. Popular Publications immediately replaced him with Emile C. Tepperman, who picked up were Davis left off, spinning slightly more hard-boiled exploits of Jimmy Christopher than had appeared before. Whether it was declining sales, or the realization that pitting a lone Secret Service agent against a monthly invasion or incursion from a belligerent foreign nation, simply strained the credulity and patience of 1936 readers remains unknown. Whatever the reason, Tepperman changed the face of Jimmy Christopher and pulp forever with the epic Purple Invasion serialized novel. With those merciless vandals turned loose by the Purple Emperor, what had been America was now a land of savagery and sacked civilization lay smouldering in ruins. For the coming of the Gothic hordes with flame and blade was a living scourge across the face of the eastern states, and Operator #5, racing against time, sped on to New York's wrecked towers to meet there in battle the fury of Urslup the Strong! The Bloody Frontiers is read with stirring intensity by Milton Bagby. Originally published in the November-December 1937 issue of Operator #5 magazine.