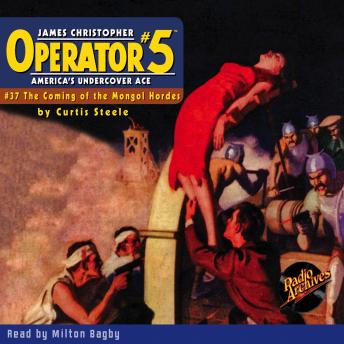 Operator #5 #37 The Coming of the Mongol Hordes

Download or Stream instantly more than 55,000 audiobooks.
Listen to "Operator #5 #37 The Coming of the Mongol Hordes" on your iOS and Android device.

Sweeping through ravaged Pennsylvania, came the blood-maddened Mongol legions - already planning a swift and merciless descent upon helpless New York City! Before them, a starring, ragged band of desperate patriots - led by Operator #5 - was America's only hope of saving its metropolis. A thousand Yankee fighters who would turn them back - or die! After a false turn in which Operator #5 flirted briefly with being a kind of super G-man in the April, 1936 novel, Crime's Reign of Terror, the magazine was downgraded to bimonthly status and what has become known as the "War in Peace of the Pulps" commenced with the searing novel, Death's Ragged Army, which appeared in the July, 1936 issue of Operator #5 magazine. The premise was simple. The legions of the Germanic Central Empire in Europe, led by the forces of Emperor Maximilian, simply swept in and took over New England, initiating the Second War of Independence. Jimmy Christopher and his allies in the Intelligence Service went from being free citizens of the United States to becoming guerrilla soldiers in a desperate undertaking, to hurl back to Europe the forces of the Purple Emperor and his bloodthirsty son, Rudolf. Operator #5 magazine went from being an espionage-adventure title to a thundering war pulp. The legendary Purple Invasion series had begun. The severed heads of patriots dangled from Mongol leaders' blood-stained saddles, and in their wake rumbled dread, primitive machines of death. Barring their advance was only that little band of patriots at Valley Forge. But on that sacred battleground, while Operator #5 fought to save a girl from being hurled to death by a giant catapult, and civilization was being turned back to the Dark Ages by a horde of Asiatic vandals - America struck against a Yellow Dictatorship for the freedom of the world! The Coming of the Mongol Hordes is read with stirring intensity by Milton Bagby. Originally published in the January-February 1938 issue of Operator #5 magazine.