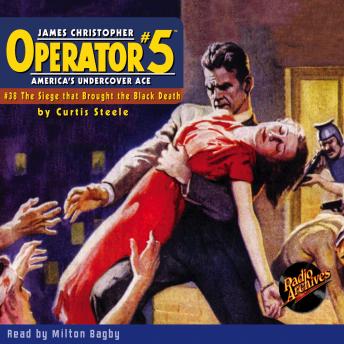 Operator #5 #38 The Siege that Brought the Black Death

Download or Stream instantly more than 55,000 audiobooks.
Listen to "Operator #5 #38 The Siege that Brought the Black Death" on your iOS and Android device.

Pitted against the Mongol land forces, and the Purple Fleet, bombarding from the sea - New York's embattled army had stood off the long, bitter siege. At last, victory was within the grasp of Operator #5 and his little band of American fighters. Then came the Emperor's final trump card - a foul, slaying miasma which loosed itself over the land, bringing a torturing, horrible death - which all men knew and feared as Europe's medieval Black Plague! Never before had an action hero failed to resolve the main threat by the end of his own magazine's lead novel. But with The Purple Invasion in the Operator #5 magazine, Jimmy Christopher was forced to fight on and on, with no clear victory in sight. In fact, the situation simply got worse and worse with each intense installment. Long-time characters perished. New ones were introduced. They fell in battle. It was heroic tragedy on a scale never before seen. Tepperman also threw enough hopeless scenarios into the mix that each and every issue, readers believed Jimmy Christopher just might not make it. Yet he did in true hero fashion, always the worse for wear. Almost as a response, the next fearsome battle would be worse. It appeared Operator #5 might not ever stop the Purple Invasion. Just when all seemed hopeless, Emile C. Tepperman finally brought the Purple Invasion to a conclusion in the March, 1938 issue. The wrap-up was sudden, and almost entirely unexpected. In the novels leading up to this climactic story, it appeared that the Purple Invasion storyline was destined to go on and on and on. New York had fought through a horrific, nightmarish captivity. With an end in sight, Operator #5 and his ragtag army found hope. Then, from out of the Emperor's devil cauldron, rose a scourge from a dark past! The Siege that Brought the Black Death is read with stirring intensity by Milton Bagby. Originally published in the March-April 1938 issue of Operator #5 magazine.