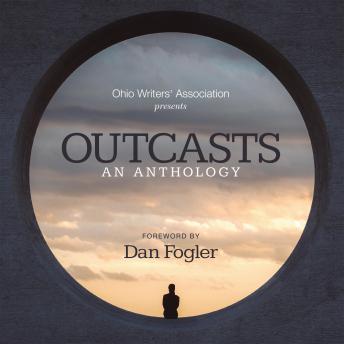 Download or Stream instantly more than 55,000 audiobooks.
Listen to "Outcasts: An Anthology" on your iOS and Android device.

They stick out. They change the conversation. They challenge the traditional narrative. They are Outcasts—isolated, different, misunderstood. Being normal is nice. But being outcast is a real part of the human experience.

The Ohio Writers' Association has partnered with Ohio Audiobook Narrators to write and produce these short stories that describe the very human experience of being 'Outcast'.

'The Priest and the Robot' by Joe Graves, narrated by Becky White

'The Bear' by Devon Ortega, narrated by Gretchen LaBuhn

'Man in the Box' by Diane Callahan, narrated by Doug McDonald

'The Suitor' by Stella Ling, narrated by Beth Kesler

'Those Who Slip Through' by Curtis A. Deeter, narrated by Gary Leo Smith

'Best If Used By' by Mary McFarland, narrated by Becky White

'Parquet to the Past' by Mike Sieminski, narrated by Angus Freathy

'A Tummy Rub for Gaffney' by Stephen Kyo Kaczmarek, narrated by Doug McDonald