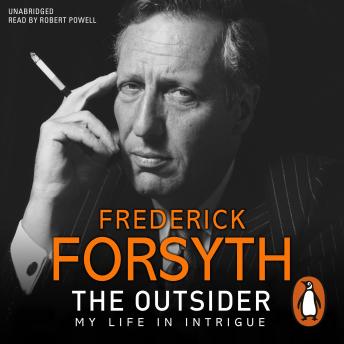 The Outsider: My Life in Intrigue

Download or Stream instantly more than 55,000 audiobooks.
Listen to "The Outsider: My Life in Intrigue" on your iOS and Android device.

Frederick Forsyth has seen it all. And lived to tell the tale.

'We all make mistakes, but starting the Third World War would have been a rather large one. To this day, I still maintain it was not entirely my fault. But I’m getting ahead of myself.

During the course of my life, I’ve barely escaped the wrath of an arms dealer in Hamburg, been strafed by a MiG during the Nigerian civil war, and landed during a bloody coup in Guinea-Bissau. The Stasi arrested me, the Israelis regaled me, the IRA prompted a quick move from Ireland to England, and a certain attractive Czech secret police agent – well, her actions were a bit more intimate. And that’s just for starters.

All of that I saw from the inside. But all that time I was, nonetheless, an outsider.'

Trained first as a pilot, then as a journalist, Frederick Forsyth finally turned to fiction and became one of the most lauded thriller writers of our time. As exciting as his novels, Forsyth’s autobiography is a candid look at an extraordinary life lived to the full, a life whose unique experiences have provided rich inspiration for thirteen internationally bestselling thrillers.