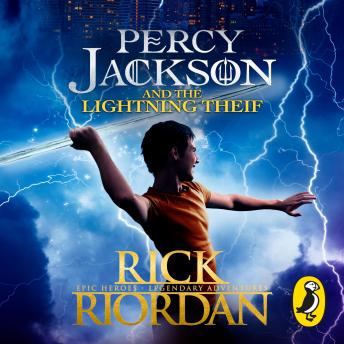 Download or Stream instantly more than 55,000 audiobooks.
Listen to "Percy Jackson and the Lightning Thief (Book 1 of Percy Jackson)" on your iOS and Android device.

Penguin presents the audio edition of Rick Riordan's Percy Jackson and The Lightning Thief, read by the actor Jesse Bernstein.

Half boy. Half God. All Hero.

Look, I didn't want to be a half-blood. I never asked to be the son of a Greek God.

I was just a normal kid, going to school, playing basketball, skateboarding. The usual. Until I accidentally vaporized my maths teacher. Now I spend my time battling monsters and generally trying to stay alive.

This is the one where Zeus, God of the Sky, thinks I've stolen his lightning bolt - and making Zeus angry is a very bad idea.