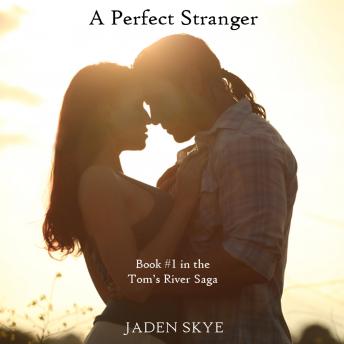 Download or Stream instantly more than 55,000 audiobooks.
Listen to "A Perfect Stranger (Book #1 in the Tom's River Saga): Digitally narrated using a synthesized voice" on your iOS and Android device.

This recording has been digitally produced by DeepZen Limited, using a synthesized version of an audiobook narrator’s voice under license. DeepZen uses Emotive Speech Technology to create digital narrations that offer a similar listening experience to human narration. From the #1 Bestselling author of Death By Honeymoon, comes a new romance series....

Nestled among trees and hills, set alongside a winding river, the small town of Tom’s River, Wisconsin, so beautiful and protected, is a place where everybody knows each other, a place where nothing ever changes and where people can feel safe. But one day, all that changes. Megan’s husband has gone missing, and no one can find him.

As the search deepens, Megan discovers the truth not only about her husband, but also about the secrets he’s been hiding in their marriage. Her world is shook as she realizes she’s been living a lie, has been in a relationship with a man who’s been living a secret life, a man she never really knew.

Some months after his disappearance, as the snows of winter melt, Hunter, a handsome, magnetic stranger, arrives in Tom’s River. A loner with a mysterious past, he is content with his solitary job at the lumber yard. But as a tornado ravages the town, he is destined to cross paths with Megan, as she seeks help to repair her damaged home.

Once Hunter and Megan meet, nothing is ever the same again. As he repairs the roof that blew off her home, the two cannot hold back their feelings for each other. They fall madly in love. Yet Megan cannot, once again, live with a man who is keeping secrets from her: she needs Hunter to open up about who he is, about what he’s running from. And that is not something Hunter may be ready to do.

As they face a crucial crossroads in their affair, a shocking and dramatic twist hits the town: one that will test their love, and will test the town. Nothing will be the same in Tom’s River again.