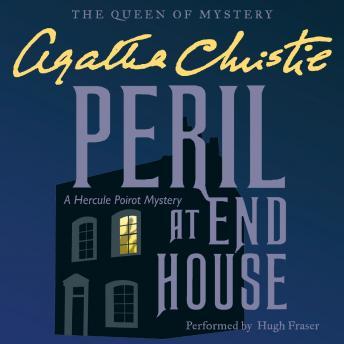 Download or Stream instantly more than 55,000 audiobooks.
Listen to "Peril at End House: A Hercule Poirot Mystery" on your iOS and Android device.

In the Agatha Christie classic Peril at End House, a young woman who has recently survived a series of very close calls appears to be the target of a dedicated killer—and it’s up to Hercule Poirot to save her life.

On holiday on the Cornish Riviera, Hercule Poirot is alarmed to hear pretty Nick Buckley describe her recent “accidental brushes with death.” First, on a treacherous Cornish hillside, the brakes on her car failed. Then, on a coastal path, a falling boulder missed her by inches. Later, an oil painting fell and almost crushed her in bed.

So when Poirot finds a bullet hole in Nick’s sun hat, he decides that this girl needs his help. Can he find the would-be killer before he hits his target?