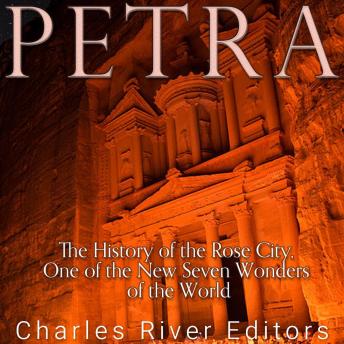 Petra: The History of the Rose City, One of the New Seven Wonders of the World

Download or Stream instantly more than 55,000 audiobooks.
Listen to "Petra: The History of the Rose City, One of the New Seven Wonders of the World" on your iOS and Android device.

When the European armies of the Third Crusade were defeated at the Battle of Hattin in 1187 CE, the region of what is today southern Jordan was overrun by Saladin’s armies, and over the following five centuries knowledge of Petra’s existence was lost to the people of Europe. The ancient city and center of civilization hidden in the desert became a myth, drawn largely upon Biblical accounts of the people and places in the Holy Land. However, during the Enlightenment of the early 18th century, interesting new theories emerged, and there grew a desire to rediscover the rose-red city.

It was within this context that the Swiss-born explorer and orientalist Johann Ludwig Burckhardt became the known as the first European to “discover” Petra. Disguised as an Arab, he convinced a local guide to navigate him through the innumerable dangers of the Wadi Araba desert in pursuit of the rumored tomb of Aaron and a timeless city hidden in the hills. On Saturday, August 22nd, 1812, he ascended the high hills of southern Jordan and was led down a deep ravine, which twisted and turned through until a splendid sight was revealed before him: a secret valley filled with ruins and the dark holes of rock-cut tombs.

Although his disguise had brought him that far, it also prevented him from being able to fully study the ruins or make copies of what he saw there. After spending only a day exploring the valley, his guide had grown suspicious, so he was forced to move on across the Sinai Peninsula, eventually arriving at Cairo on September 4th. This expedition marked the beginnings of everything that is known about this ancient and mysterious site.

Further expeditions and archaeological investigations over the following two centuries have considerably broadened knowledge about Petra’s past, and the ruined Rose City is now an archaeological landscape that has been made famous as a UNESCO World Heritage site, a “new” wonder of the world, and as the repository of the Holy Grail in Indiana Jones and the Last Crusade. Yet, despite its fame, many people do not know about the religious beliefs, artistic creativity, technological innovation, commerce, and politics of the numerous peoples that resided there.

Petra: The History of the Rose City, One of the New Seven Wonders of the World looks at the history of Petra from prehistoric times to the end of the Crusades, as well as the city’s “rediscovery” in the 19th century and how it has entered the world’s imagination since then.