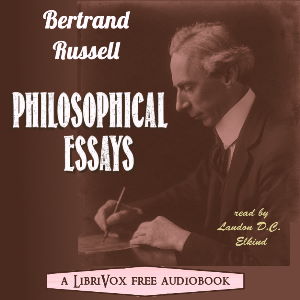 Download or Stream instantly more than 55,000 audiobooks.
Listen to "Philosophical Essays" on your iOS and Android device.

Six out of seven essays appearing here were reprinted from other publications; indeed, this 1910 collection went out of print, so that two of the essays occurring here were reprinted in Russell's 1917 "Mysticism and Logic, and Other Essays". Nonetheless, this essay records Russell's thinking at a critical juncture, just before the publication of Volume I of the co-authored "Principia Mathematica" and just after the passing of the American pragmatist, William James. These essays record Russell's reactions to pragmatism and its theory of truth, as well as the ethical aspects of philosophy suitable for co-existing alongside the new logical method in philosophy, announced subsequently in the 1914 "Our Knowledge of the External World: as a Field for Scientific Method in Philosophy".