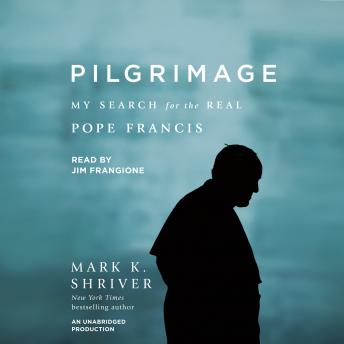 Pilgrimage: My Search for the Real Pope Francis

Download or Stream instantly more than 55,000 audiobooks.
Listen to "Pilgrimage: My Search for the Real Pope Francis" on your iOS and Android device.

A down-to-earth and deeply intimate portrait of Pope Francis and his faith, based on interviews with the men and women who knew him simply as Jorge Mario Bergoglio

Early on the evening of March 13, 2013, the newly elected Pope Francis stepped out onto the balcony of St. Peter’s Basilica and did something remarkable: Before he imparted his blessing to the crowd, he asked the crowd to bless him, then bowed low to receive this grace. In the days that followed, Mark K. Shriver—along with the rest of the world—was astonished to see a pope who paid his own hotel bill, eschewed limousines, and made his home in a suite of austere rooms in a Vatican guesthouse rather than the grand papal apartment in the Apostolic Palace. By setting an example of humility and accessibility, Francis breathed new life into the Catholic Church, attracting the admiration of Catholics and non-Catholics alike.

In Pilgrimage, Shriver retraces Francis’s personal journey, revealing the origins of his open, unpretentious style and explaining how it revitalized Shriver’s own faith and renewed his commitment to the Church. To help us understand how Jorge Mario Bergoglio became Pope Francis, Shriver travels to Bergoglio’s native Argentina to meet with the people who knew him as a child, as a young Jesuit priest, and as a reformist bishop. Shriver visits the confessional where Bergoglio first felt called to a faith-based life and takes us to the humble parish where the future pontiff’s pastoral career began: in a church created from a converted vegetable shed in an area just outside the city of Buenos Aires. In these impoverished surroundings, Bergoglio answered Christ’s call to feed the hungry, clothe the naked, and shelter the homeless, following the example set by his papal namesake, St. Francis of Assisi.

In this deeply reported yet highly personal book, Mark K. Shriver explores how Francis's commitment has struck a chord in the hearts of millions who long to make faith, love, humility, and mercy part of their lives as they go out into the world to serve and learn from the most marginalized.

“Well-researched . . . Pilgrimage shines a light on [Pope Francis’s] unexplored aspects. . . . A very timely and important addition to the literature on the life and person and thinking of Pope Francis. Everybody interested in Pope Francis will enjoy reading this biography.”—The Washington BookReview

“Apt to stir the soul of readers . . . While this is a rich telling of Bergoglio’s life and ascension to the papacy, it is more movingly a spiritual memoir that draws us deep into a knowing of this at once humble and soul-stirring rekindler of faith.”—Chicago Tribune

“A fascinating portrait of a man and a nourishing account of spiritual yearning.”—Booklist

“This fast-paced and fascinating tale takes us on Jorge Mario Bergoglio’s pilgrimage from his grandmother’s knee in the Italian-Argentine community, through years of success and sorrow in the tumultuous country that he loved, to his surprise election as Pope Francis.”—Cokie Roberts, New York Times bestselling author of Capital Dames: The Civil War and the Women of Washington, 1848–1868

“All people of good faith, including those whose lives are not guided by religious beliefs, will be inspired and enlightened by the compelling manner in which Pilgrimage brings us closer to the heart and mind of Jorge Mario Bergoglio, Pope Francis. I highly recommend this book; it will make a difference in your life.”—Cardinal Seán O’Malley, OFM Cap.