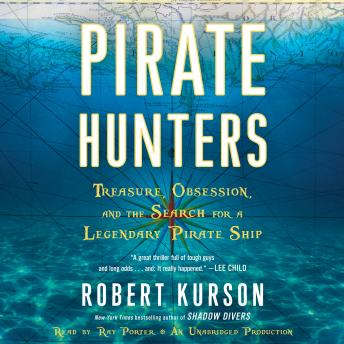 Pirate Hunters: Treasure, Obsession, and the Search for a Legendary Pirate Ship

Download or Stream instantly more than 55,000 audiobooks.
Listen to "Pirate Hunters: Treasure, Obsession, and the Search for a Legendary Pirate Ship" on your iOS and Android device.

NEW YORK TIMES BESTSELLER • NAMED ONE OF THE BEST BOOKS OF THE YEAR BY CHICAGO TRIBUNE • A thrilling adventure of danger and deep-sea diving, historic mystery and suspense, by the author of Shadow Divers

Finding and identifying a pirate ship is the hardest thing to do under the sea. But two men—John Chatterton and John Mattera—are willing to risk everything to find the Golden Fleece, the ship of the infamous pirate Joseph Bannister. At large during the Golden Age of Piracy in the seventeenth century, Bannister should have been immortalized in the lore of the sea—his exploits more notorious than Blackbeard’s, more daring than Kidd’s. But his story, and his ship, have been lost to time. If Chatterton and Mattera succeed, they will make history—it will be just the second time ever that a pirate ship has been discovered and positively identified. Soon, however, they realize that cutting-edge technology and a willingness to lose everything aren’t enough to track down Bannister’s ship. They must travel the globe in search of historic documents and accounts of the great pirate’s exploits, face down dangerous rivals, battle the tides of nations and governments and experts. But it’s only when they learn to think and act like pirates—like Bannister—that they become able to go where no pirate hunters have gone before.

“You won’t want to put [it] down.”—Los Angeles Times

“An exceptional adventure . . . Highly recommended to readers who delight in adventure, suspense, and the thrill of discovering history at their fingertips.”—Library Journal (starred review)

“A terrific read . . . The book gallops along at a blistering pace, shifting us deftly between the seventeenth century and the present day.”—Diver

“Nonfiction with the trademarks of a novel: the plots and subplots, the tension and suspense . . . [Kurson has] found gold.”—The Dallas Morning News

“Rollicking . . . a fascinating [story] about the world of pirates, piracy, and priceless treasures.”—The Boston Globe

“[Kurson’s] narration is just as engrossing as the subject.”—The Christian Science Monitor

“A wild ride [and an] extraordinary adventure . . . Kurson’s own enthusiasm, combined with his copious research and an eye for detail, makes for one of the most mind-blowing pirate stories of recent memory, one that even the staunchest landlubber will have a hard time putting down.”—Publishers Weekly (starred review)

“The two contemporary pirate-ship seekers of Mr. Kurson’s narrative are as daring, intrepid, tough and talented as Blood and Sparrow—and Bannister. . . . As depicted by the author, they are real-life Hemingway heroes.”—The Wall Street Journal

“[Kurson] takes his knowledge of the underwater world and applies it to the ‘Golden Age of Piracy’ . . . thrillingly detailing the highs and lows of chasing not just gold and silver but also history.”—Booklist

“A great thriller full of tough guys and long odds . . . and: It’s all true.”—Lee Child