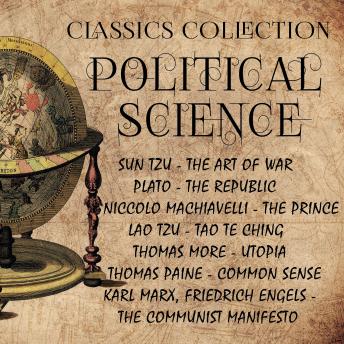 Why Political Science Classics Collection is so important? In today's world, providing quality training for the younger generation at colleges and universities is of primary importance. But higher education is not enough. Any graduate is first and foremost a citizen of his nation. He has the right to be an actor in the political life of his society. The political changes taking place today in the modern world are dependent on the civic stance of each person. In this way, a serious challenge facing the world system of higher education is to educate citizens who are capable of navigating and influencing the modern political processes in his country. Youth today actively participate in campaigns carried out by political parties and community organizations. However, it is impossible to develop conditions which foster a civic position without the existence of a political culture. In today's global community, facing growing pressures of political extremism and radicalism, knowledge of basic political science principles should help students develop a democratic ethos and foster qualities, such as political tolerance, compromise, and cooperation, while learning to express and defend their interests in a civilized manner. The foundation of political science lies in the accumulated knowledge of mankind. This collection was compiled as an aid to college and university students. Each included piece is required reading at some of the best universities on the planet including: Harvard, Princeton, Yale, and Columbia Universities, the Massachusetts Institute of Technology (MIT), and the Universities of Oxford and Cambridge, among others. This collection includes works famous authors: The Art of War by Sun Tzu Tao Te Ching by Lao Tzu The Republic by Plato Meditations by Marcus Aurelius The Prince by Niccolo Machiavelli Utopia by Thomas More Common Sense by Thomas Paine Utilitarianism by John Stuart Mill The Communist Manifesto by Karl Marx and Friedrich Engels The State and Revolution by Vladimir lenin